In one of its best defensive performances of the Steve Wojciechowski era, No. 16 Marquette allowed Xavier to make just one of 14 three-point attempts and 31.5 percent shooting on the whole in beating the Musketeers, 70-52, at Fiserv Forum Sunday.

Bouncing back from a lackluster effort in its BIG EAST opener against St. John's on New Year's Day, Marquette (12-3, 1-1 BIG EAST) leaned heavily on junior Sacar Anim, who had one of the better performances of his career. Anim's 20 points were a season high, while he also added seven rebounds. Markus Howard led Marquette with 26 points and added eight assists. Junior transfer Ed Morrow, Jr. came off the bench and grabbed 10 rebounds while Joey Hauser continues to impress in his first BIG EAST games, scoring 18 points.

Ryan Welage's only three points of the game came with 6:52 remaining in the contest, but they represented the lone three-pointer Xavier (9-7, 1-2) would hit. Naji Marshall scored 21 points to pace the Musketeers, and Paul Scruggs added 17 before fouling out, but Xavier never led, nor got closer than nine points in the second half. After the Musketeers shrunk Marquette's lead to that second-half low-water mark at 37-29, Marquette went on an 11-0 run and never looked back.

Marquette remains unbeaten at Fiserv Forum in 11 games played at the new arena, however, it has lost both the road games it has played thus far this season. The Golden Eagles will get a chance to capture their first road win Wednesday night at 6 p.m. CST when they face Creighton in Omaha, Neb. 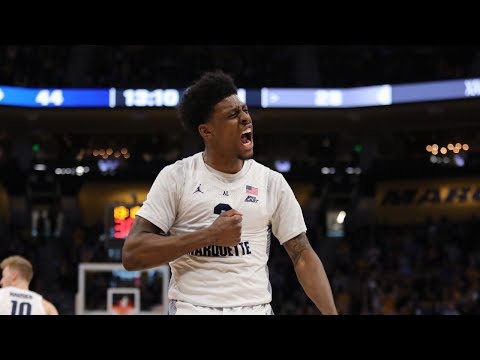 Marquette's home record at Fiserv Forum is now 11-0 after beating Xavier 70-52 on Sunday. Markus Howard led the way with 26 points.
posted by Jimmie Kaska - 1 year ago